Read parts one and two first if haven’t already!

Tuesday morning: Big Apple time! We had an awesome, huge breakfast at the diner with my dad and Sheryl, and then my dad dropped us off at the Rockville Centre LIRR train station. We’d missed rush hour, but the train was still full, with no two seats together, so we split up. Gabe and I had a nice talk with a young man named Eric who was going into the city for a meeting. For some reason he reminded me of Fievel from “An American Tail”, with sparkling brown eyes, immigrant parents and a goofily mischievous demeanor belied by his business attire.

At Penn Station, Eric warned us not to take directions from people not in uniform ( the locals like to play tricks on tourists), and then he kindly directed us towards Times Square. Up the escalator we went, into almost blinding sunlight and heat,which was magnified by the endless maze of concrete, asphalt, and the constant wave of tourists that occupied every inch of sidewalk. 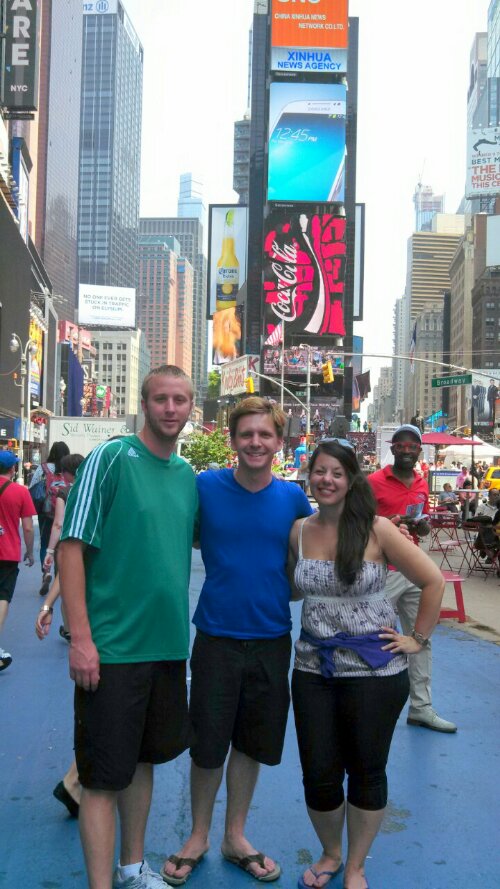 We took a few obligatory pictures in Times Square, and soon were herded by enthusiastic Colgate representatives into a roped off section where they wanted us to participate in setting a world record for people swishing with mouthwash simultaneously. We stood there with our free ponchos in hand (to protect from gargle spray) with 500 of our closest friends for maybe three minutes, then decided that it was a stupid world record. We slipped out (to the chagrin of the volunteers) and continued on our way, promptly depositing our Colgate goodie bags in the nearest trash receptacle.

We spent about an hour on foot, going into St. Thomas’ church ( kinda creepy, brought to mind catacombs, but made Gabe want to sing like a monk) and pausing to get a picture in front of Trump Tower (caption: “You’re fired!”) 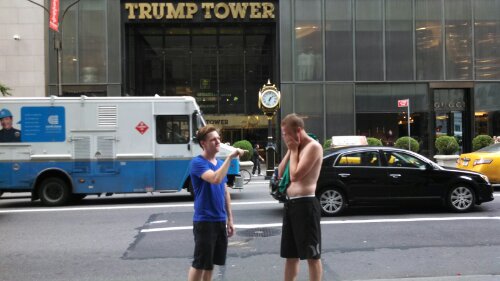 One thing Thiago and Gabe were really looking forward to in New York City was the opportunity to ride Citibikes: a new transportation system that had just started two weeks prior. There were bike ports located strategically all over the city, and for the low, low price of ten dollars you could rent one for the day. 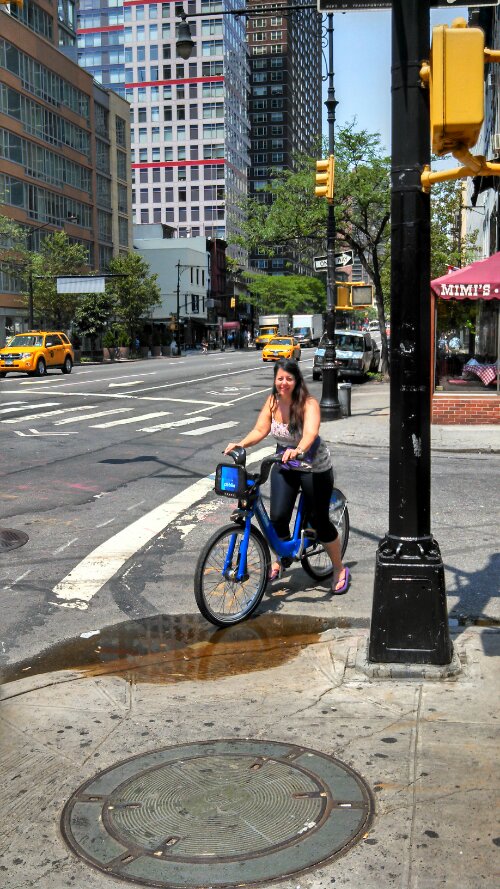 The deep blue bikes were sleek, shiny, and durable. We swiped our credit cards, punched in our codes, eased into the bike lane, and off we went! I was initially against the bike idea, but I have to admit that it felt great to cruise along the bike lane, unhindered by the throng of pedestrians and the stop -and -go of car traffic. It also cooled us down considerably by generating a pleasant breeze. There were two drawbacks to Citibikes, however: one, it was a brand new system, so certain streets didn’t have designated bike lanes. Suddenly you would be two inches on the left from a moving cab, trying not to sideswipe the parked delivery van two inches on the right. The second blip was that the bikes had to be returned or swapped at a bike port every half hour or a charge would incur. I thought that could be a pain. I was right.

We swapped bikes right outside of Central Park. This was MY thing to do in New York. I’d been to the city several times before, but never got to see the famous Central Park. Honestly, I still haven’t seen it. We stayed only on the main road, pedaling as fast as we could to get through the park. We didn’t stop. Not once. Not at the zoo, not at the lake (or pond, how would I know?),not to stroll around. Bupkis. After fifteen minutes of speed biking we had to do an about-face and head back for the bike port. We did get some pictures though. The boys were shirtless. Again. 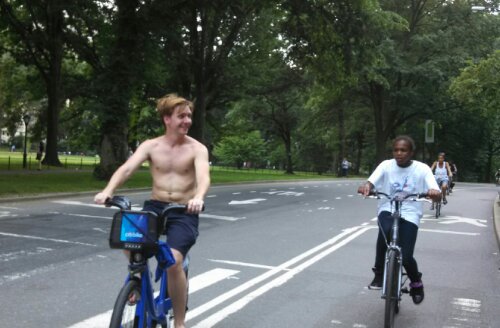 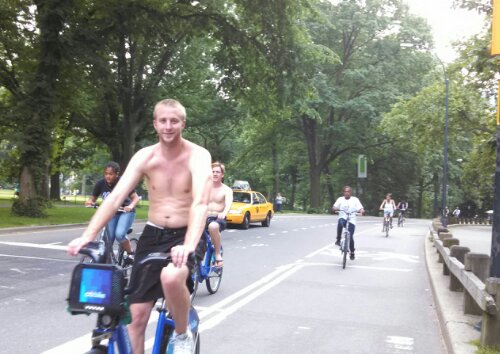 We rode to another bike port around 2nd and 50th street, and decided to get lunch. By this point the heat was starting to get to us, and all the biking had made us a little tired. We picked the first place that looked reasonable, a small Italian place called “Figaro’s”. We sat on the patio, which was absolutely tiny and was halfway on top of a huge sewer grate. The fake wooden tables wobbled, and we were practically in the street. I noticed “Blockheads” Mexican restaurant right across the street after we’d ordered and fervently wished I’d seen it sooner. My friend Brittany had told me of all the fun times she’d had there when she lived in the city. Oh well. The food was actually pretty decent, although the ambiance left everything to be desired.

My cousin Alina saw I was in town and decided to come hang out with us. She took the train in and met us at Figaro’s, and then we convinced her to Citibike with us. We mounted up once again and this time took the Greenway, a long, continuous bike path that hugged the Hudson River. There were storm clouds threatening, but the harbor was beautiful, from the glimpses I got as we pedaled furiously towards the next bike port. We passed people from all walks of life doing all sorts of interesting things: playing basketball, tennis, jumping rope, enjoying an afternoon in New York City. Normal for them, with huge skyscrapers on one side and the Hudson on the other, surrounded by millions of people doing millions of different things all at once. To me it was chaos and too much to take in; for them, it was Tuesday. 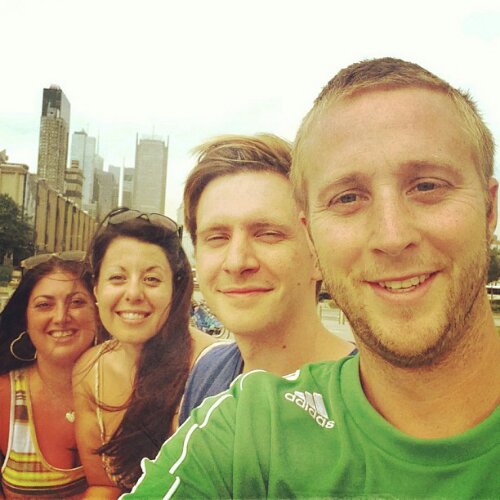 Ground Zero, the home of the new Freedom Tower, was our destination. After narrowly escaping death a few times on the bikes (Alina was oblivious to the danger, listening to music on her headphones and texting while treacherously close to moving vehicles), we walked around in a maze trying to find the entrance to the Memorial, then went through airport-level security to get in. The memorial was not what I expected. Where the Twin Towers had stood, were two giant,square, foundation-size, dark -marbled holes in the ground that had water streaming from each side into a smaller, seemingly bottomless hole in the center. The sides of the waterfalls were my favorite part, etched with the names of those who lost their lives in 9/11. That brought tears to my eyes. However, I was not a fan of the cold, sleek, wet memorials. They were boring and soulless. I thought the space could have been better utilized as a park or place that people could gather and have life.

The sun was sinking lower in the sky, and we knew our day was almost up. We decided to do one last fun thing in the city, and I suggested (surprise, surprise) getting a drink. The fun part was that it had to be a rooftop bar! We sat in Zucotti park, googled where we could find such a treasure, and then we plotted our course. Our leg muscles laughed out loud at the suggestion of biking again, so we decided to take the subway, which was something Gabe had always wanted to do. As it was his first time, unfortunately, he wasn’t used to the rotating gate system that only lets one person through at a time, then locks back into place. Gabe got his MetroCard right as the train was approaching, then pushed the gate until it clicked…without him ending up on our side. The train came and went, emotions ran high, and Alina went to talk to the security guard, who buzzed Gabe through the normal door. He was a little embarrassed, but in another five minutes we were on our way. We hugged Alina goodbye on stop before ours. It was so sweet of her to come meet us, and great to see family I don’t get the chance to spend time with very often.

We were once again at Penn Station. After a brief walk, we found our final destination (on the 20th floor!), and stepped out into a little world way up in the sky. Hundreds of well-dressed people mingled and laughed as fairy lights twinkled in the artistically manicured topiaries. 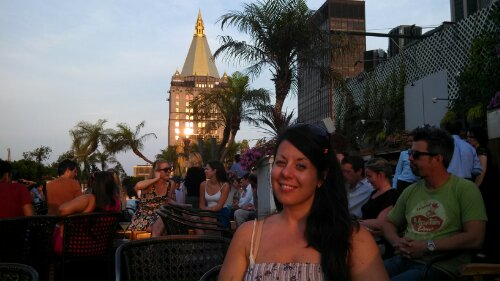 The sky tinged pink with the setting of the sun, and we relaxed for the first time all day, surrounded by the type of people that can afford twelve dollar rum and cokes on a regular basis. It was beautiful up there, that’s for sure. The view was worth the arm and the leg. 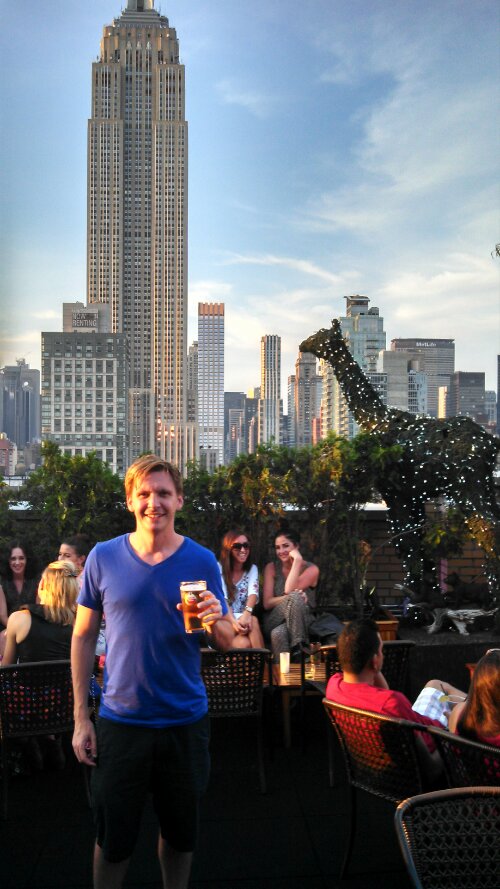 After a while, we decided to call it a day and headed back towards the train station to catch the LIRR back to Rockville Centre. The seven blocks took longer than anticipated, so once more we mustered our strength and hopped on the Citibikes. It.Was.Glorious.

Twilight descended on us as we coasted through the once bustling streets toward Penn Station. The wind in our faces, the city glowing around us, we glided with child-like glee to the final port, which we were guided to by a friendly Indian guy who was also biking.

As we bid farewell to the city that never sleeps and entered the subway station, we noticed people running, so we ran too. It wasn’t panic, just people in a hurry. We weren’t sure which train they were rushing towards, but luckily, it turned out to be ours! We made the train just in the nick of time.

On the half hour ride back to Long island, we shared our bike stories with a strikingly handsome man wearing a Saint Anthony medal around his neck. We laughed almost hysterically at how we saw so much and so little at the same time, and how we felt like bike couriers trying to make half hour deadlines all day. So stressful! We came to the conclusion that if used solely for short-term a – b transportation, they were great..as a way to see the city, not so much.

My dad picked up us three weary travellers around 930 and then we all went out for a big dinner at the Grand Lux Cafe. We were tired but had worked up an appetite from all the exercise. Dinner was delicious and we went to bed full and happy, sure we would dream of being back on the bikes.

Our final day in Long Island was comparatively uneventful to the rest of our trip. We had a great breakfast with my family at the diner, attempted to go to the beach before realizing there was a ridiculous cover charge, and then just hung around town. Thiago got a handsome Guido haircut, I got a margarita, and then we went on a drive along the narrow peninsula of the Island with my dad. We talked about life and God, and it was a sweet time.

That night we had a delicious farewell dinner with my family at a Belgian restaurant called Waterzooi. They specialized in mussels. I ordered chicken. 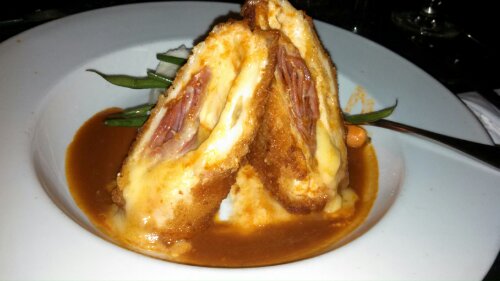 The food was exceptional, the conversation lively and entertaining. I was so pleased with how well my friends and my family were getting along. 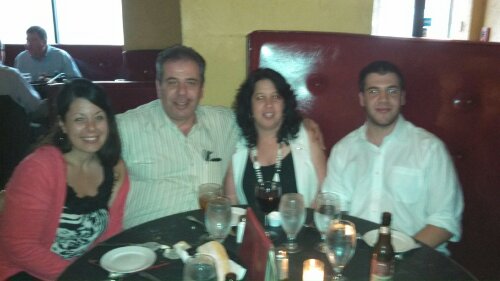 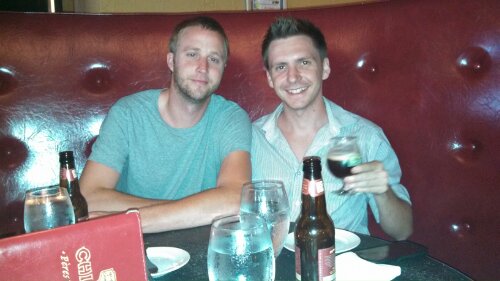 On the way home my dad told us about the time a local TV station did a spot on his restaurant. He was so nervous about being interviewed that he said things like this:
Q. “What can people expect to find here at your diner?”
A. ” We have everything from lobster to Filet Mignon!”
Neither item is on their menu. I really need that unedited video.

It was already 10 pm when we said our goodbyes in the parking lot of the diner. We drove through the night, laughing, talking, taking turns sleeping. The consensus was this: we couldn’t have asked for a better or more memorable trip, and it brought us closer to our families, and to each other.

4 am brought us back to RVA: to jobs, responsibilities, and normal routine. Sigh. I’m ready to start planning the next adventure… 🙂