As the roosters crowed noisily, the ladies in the teachers’ apartment at the edge of the property stirred, awakening to the realization that we were 7,288 miles from home.

We pushed back out mosquito nets, still a little tired from our long flight. On the last leg of our journey I sat next to a pastor from Burundi who was asking me if I was “Marriott”. Finally I realized he meant “married”, and I said no. Then he asked if he could be a candidate. Nope. Things got awkward for the next hour and a half, but all in all he was nice and it was a pleasant journey.

Our first day we took it easy,  meeting the school staff and the kids and taking a tour around the property of the Uganda School for the Deaf.  The staff and volunteers had done a great job making the place bright and colorful, with anatomy, sign language, and geography lessons painted outside the brick classrooms. The kids were cute and very friendly, signing good morning to us and smiling. 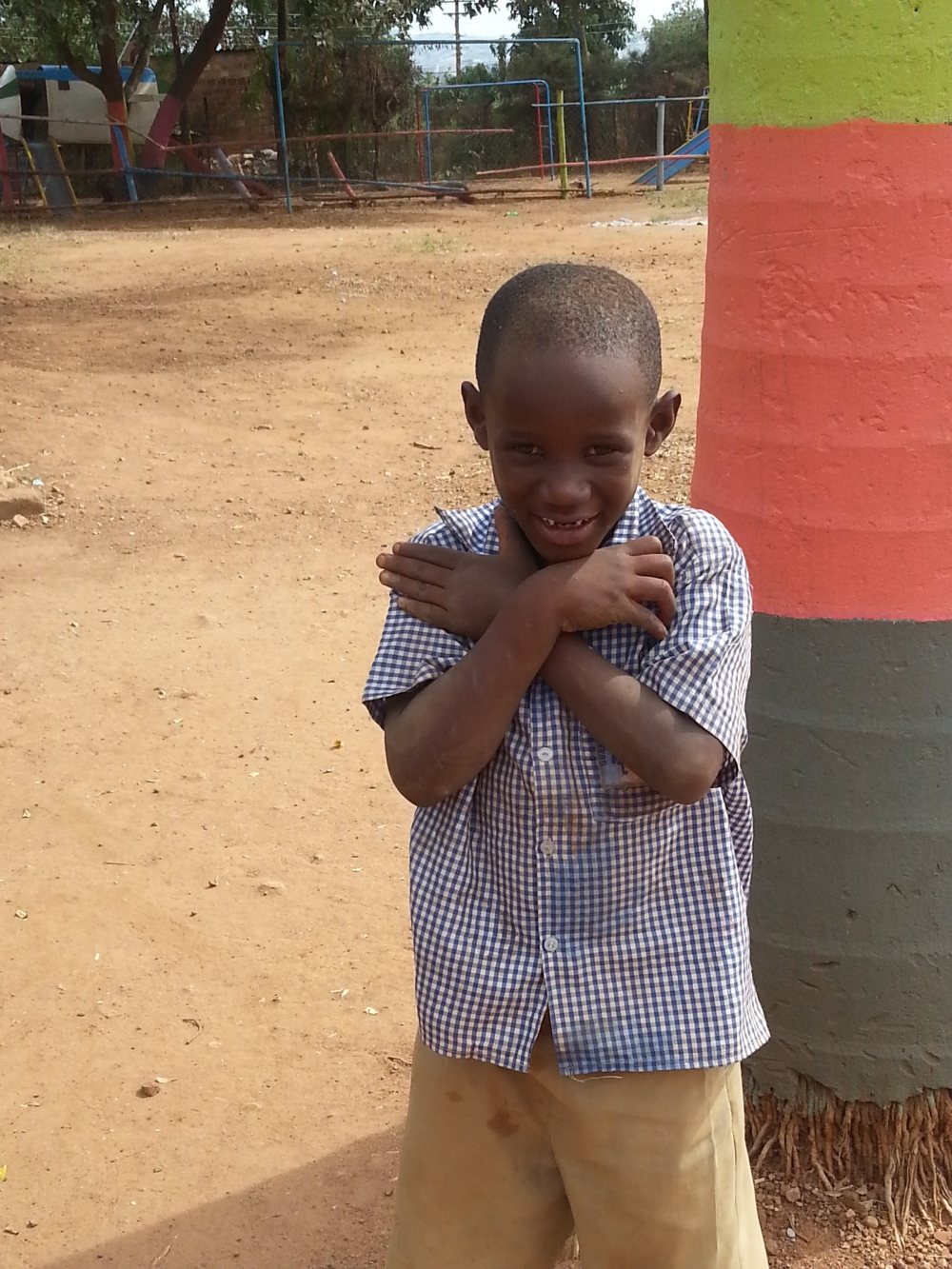 We ate dinner at Javva’s with our new friend Alan, who had picked us up from the airport the night before. It was a Tuesday,  our usual Girls Night, so I asked Alan to take a picture of Girls Night Kampala. It felt great to be sitting outside at night in February.  The temps were mid eighties during the day, and pleasant in the night time. 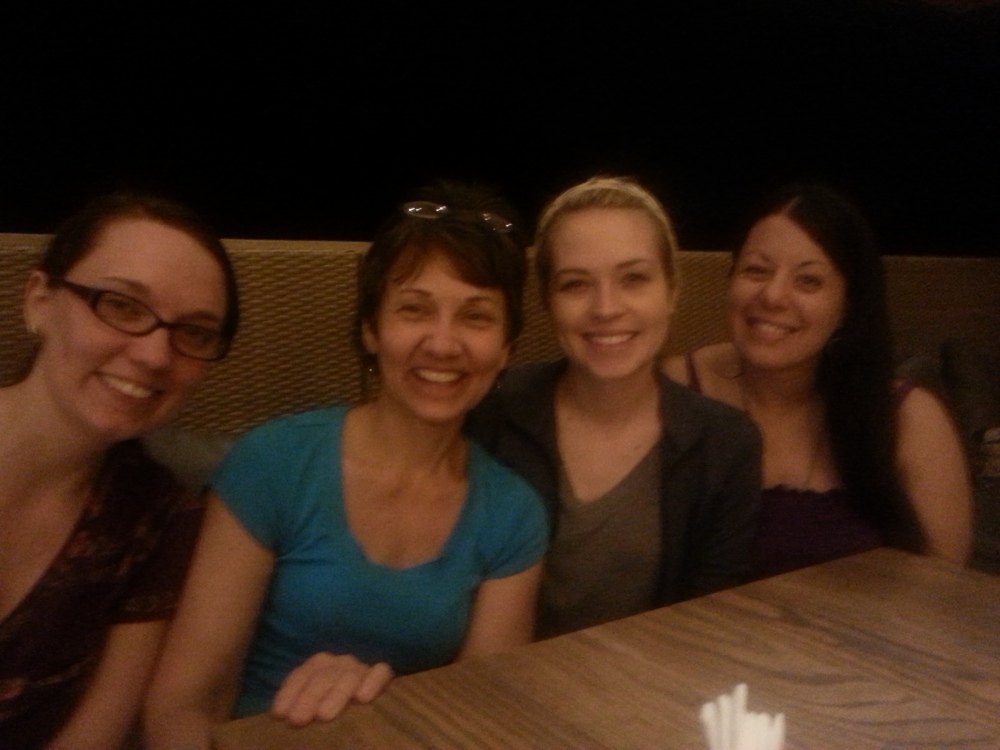 We went to bed early, soothed by the sound of the large fan Karen had purchased and walked back from a nearby supermarket. Tomorrow was safari!

The next morning, bright and early, we met our safari guide and driver, Isaac.  We piled into the Toyota luxury van and drove out into the Ugandan countryside.  As surprised as I was by the modernity of Kampala, the never ending landscape of people,  boda boda (motorcycle taxis), and seemingly inhabitable homes and shops sprawled on forever as we drove out of the city. We passed homes painted in advertisements, the Doublemint house sticking out most in my memory. Babies and children played in the dirt while huge, menacing cranes (apparently the national bird ) hovered nearby on piles of refuse or on top of houses. We passed internet cafes, “pork joints” and butchers in wooden structures the size of tollbooths, sides of goat swinging in the warm air in front of them. There were people EVERYWHERE!  They were dressed nicely, and hundreds of them were walking down the side of the busy roadway,  babies strapped on their back with bright fabric slings, or bicycling furiously, loaded down with huge bunches of green bananas.  I can’t say for sure where they were going,  but going they were!

Five hours and countless strips of civilization like the ones pictured above later, we arrived in the town of Fort Portal for a nice lunch. There was a cool gift shop attached to the restaurant, and we picked up our first round of souvenirs for friends back home (Shawn Rogers. You’re welcome.).

We hadn’t realized it would be such a long drive, and we still had an hour to go to reach our destination of The Crater Lakes. I swear I thought the website had promised a short two hour drive, but the ride stretched on and on, even though Isaac drove like a bat out of..you know. We swerved around anyone going slower than 70 miles an hour, nearly missing huge trucks on the two lane roads that wound through the countryside. My thighs hurt from pressing on imaginary brakes.

An hour and a half,  one road building delay, a stop where OUR GUIDE HAD TO ASK FOR DIRECTIONS, and a nap or two later, we reached Crater Lakes and located our hike guide, Gilbert. He was a cute little fellow with an easy smile and a vast knowledge of Ugandan flora and fauna. 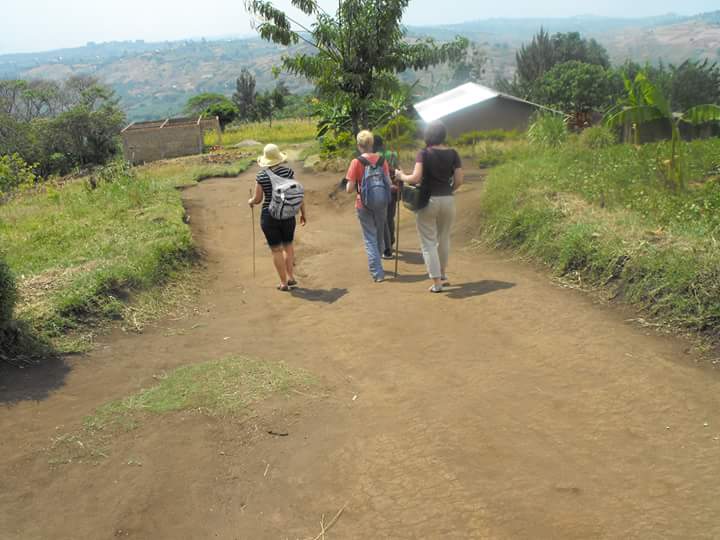 He named off the local plants for us as we trekked and tripped through jungle-like vegetation, open fields, and finally a narrow dirt path that twisted down a steep hill. A couple of us fell and got a little mountain dirt on our backsides before we made it down.

As we reached a clearing, we could see  water cascading down through the  trees. It was a waterfall! We climbed over trees and rocks to see the small pools formed where the waterfall leveled off before continuing its freefall down the mountain.

Gilbert told us we could go ahead and change into our swimsuits,  but as I was the only one who’d packed a suit, we decided we probably weren’t going to be getting in. Well, the others did. I took off my top shirt and let Gilbert help me into the water. It was COLD but it felt great! The other girls one by one let go of their misgivings and followed suit.

Karen put it the best way: she could imagine our friends saying “You hiked all the way to a waterfall in Africa and didn’t get in?”. Wet and happy, we played in the water for a few minutes and took pictures before climbing back out again and realizing that our clothes were going to be absolutely disgusting for the rest of the day. It was worth it.

After knocking my passport holder into the water ( thank you God I didn’t lose it and nothing smeared!), we made our way back up the mountain. My running up and down the steps for the past month had done absolutely nothing to get me in shape, apparently, because I was huffing and puffing like the wolf from the Three Little Pigs. It didn’t help that my flip flops were slippery. I finally kicked them off and made my way barefoot and pigeon-toed up the dirt trail. It also didn’t help my pride that on the way down we had passed an older man balancing a large plank of wood with a machete on top making his way nimbly up the side of the mountain. Show off. Someone 20 years older than me may have had to come and hold my hand and help me up part of the way. But I’ll never tell.

We got back into the car and drove for another 20 hours (fine. I’m exaggerating.) to our camp in Joseph Kibale Forest Park. But that’s a post for later. I’m tired from thinking about our hike.