We woke early to another impossibly gorgeous morning in Portugal and? packed for our day in Arrabida.

We threw on swimsuits under our hiking clothes, slapped together chicken sandwiches, and were just about to call an Uber when I got a truly disturbing Facebook message.

My roommate back in Virginia had just arrived home to find our front window broken in. Apparently only her room and closet were ransacked and she had tripped and fallen in the glass and was “all cut”.I wrote back immediately, asking if she’d called the police, and tried calling her three or four times in a row. No answer.

I was upset and worried, mostly because my indoor cat Bentley could potentially get out and get lost (or hurt) if he went thorough the broken window. AshCap’s boyfriend Richie had generously agreed to look after Bentley while we were on vacation.

It was only three-thirty in the morning back in Richmond but he (thank God) answered the phone and sleepily agreed to go over, check out the situation, and bring Bentley back home with him.

Richie only lives five minutes away, so I messaged my roommate that he would be coming to get the cat. No response.

When he got there the house was dark. The front window was indeed smashed in, but there was no reply when he knocked and so he used his key and eased into the living room. We were on speaker phone with him the whole time, so I was relieved when he said he saw Bentley right away staring at him through the broken window. He hadn’t escaped, then. There was glass all over the floor, and small but unmistakable spots of blood there and leading up the stairs to Roommate’s room.

We heard him call out for her, but there was no answer. He knocked on the bedroom door, called her name again, and then we heard the door creak open. It was like listening to a horror movie.

She wasn’t there and her room looked fine, as did her closet. Huh? This was getting weirder and weirder.

Since she had mysteriously vanished without calling the police, I asked poor Richie to call them. He did, and waited with Bentley safely ensconced in a cat carrier while the police came and swept the house for intruders. Then Saint Richie waited yet again for a detective to come take samples from the blood on the floor next to the glass. I owe him big.

Roommate actually did respond with a flurry of messages when I told her I’d had Richie call the police, and asked why I did that, since it was only her blood and there was no proof since the burglar hadn’t taken anything.

After that she went incommunicado again. The police had her contact info to make sure she was okay, Bentley was safe with Richie, the window would be boarded up in the morning. My friends had patiently sat by me for two hours as we sorted the whole mess out, and I was determined to enjoy my daggone vacation and not to ruin their day.

We went ahead and called our Uber, and a delightful, rotund man with great English named Joao picked us up and drove us the forty minutes out of town to Arrabida, showing us pictures on his cell of his two great loves: Volkswagen cars and kitty cats. He was amazing, and when finally (after missed turns, unclear directions and backtracking) we arrived at the unmarked trail that was supposed to take us around Arrabida, he sat patiently and let us debate whether we wanted to be dropped off in the middle of Nowhere, Portugal: not at all sure this was the right place and envisioning ourselves wandering  endlessly through the wilderness under a brightening sun. We finally agreed to just let Joao drop us at the beach in Arrabida. We could find the hiking trail from there.

We drove towards the water, carefully avoiding the throngs of beach goers streaming down the narrow, mountainous road. Joao let us out at the bottom, cheerfully waved goodbye, and off we went. To find beer.

We did stop at the overlook first, marveling at our first glimpse of the Portuguese ocean (aka the Atlantic, but that sounds too normal). The water was much more beautiful here: lovely light greens swirling with turquoise close to the shore. Portinho Arrabida was idyllic, with small boats bobbing peacefully in the sheltered cove, and children splashing about in the calm water.

We trudged downhill to stop at one of the dozen little restaurants hugging the rocky shoals, and settled in for a Super Bock Preta (or three.each.) on a deck with stairs right down to the water. 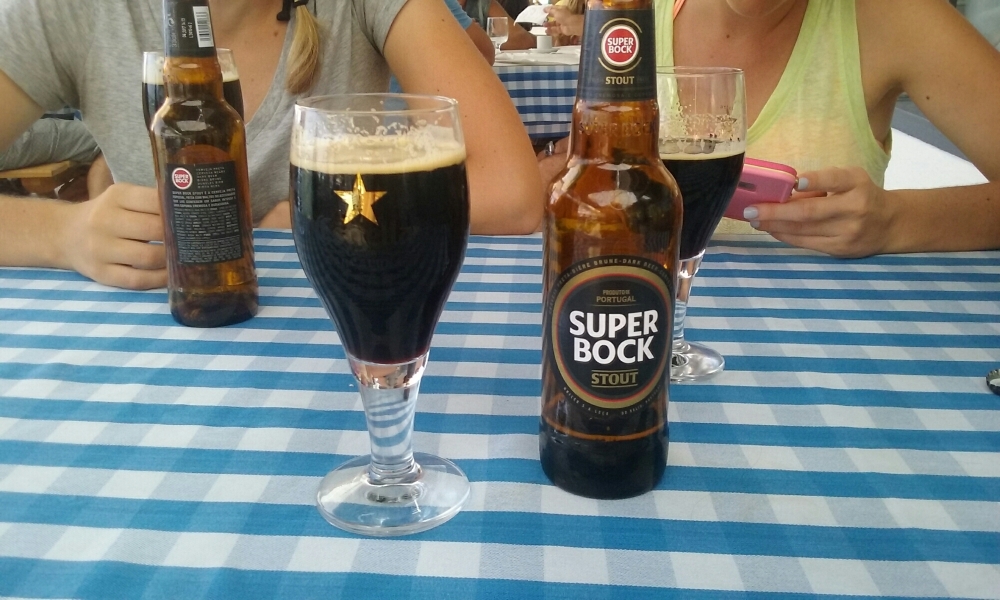 In better spirits, we headed down to spread out our towels next to the shore. We settled in and ate chicken sandwiches, chips, and cookies, sipping on a final shared bottle of stout.

After lunch we stripped down and ventured into the cold (but doable) water. We immediately noticed a topless woman ( and then another!) a few yards over. Welcome to Europe.

No hiking today. Another wildly attractive Portuguese man informed us that the trails here were only suitable for serious mountaineers: very steep and dangerous. Boo.

Eventually the sun began to sink lower in the sky and we realized we didn’t know how we were getting home. Joao’s advice had been a series of taxi, bus, and boat to get back over the river to Lisbon, but that sounded complicated. Instead we stopped in at another restaurant and the owner called a taxi for us. To thank him we purchased another round of Super Bock and settled in to wait for our ride.

The taxi sped in half an hour later, narrowly missing a poor unsuspecting dog,and screeched to a halt in front of us. There was already 16 Euro on the meter, and he drove like a bat out of ..well, you know where..to take us to the train station in the nearby town of Setubal.

We purchased train tickets, and struck up a conversation with a handsome Bolivian man named Felipe on this platform. He was also in Lisbon on holiday, taking a short break from his job in Milan. He’d been at the beach surfing with a friend today, and was planning a day trip to Sintra tomorrow, to which we exclaimed, “So are we!”. He grabbed a seat next to us ( he was also transferring to the Metro after this and getting off at our exact same station) and we had a lively conversation about the differences in culture and countries, and shared a few riddles and jokes.

We transferred to the Metro at the Zoological Garden hub, and I made a mad dash to the nearest bathroom. Girlfriend had to pee like nobody’s business. The bathroom attendant sneered at me over her floppy sandwich and pointed snidely to the sign which sadly told me the bathroom closed at 10 pm..in like 30 seconds. She let a man go in as I fumbled for my change (pay toilets, a minus for Europe), and then refused to let me in, giving me crap in Portuguese about not coming on time.

I glared at her and, having no choice, purchased a metro ticket and went down to wait for the subway with the Ashleys and Felipe.

I was in pain, and there was no way I could make it the seven stops to Santa Appolonia. AshWat kindly said she’d look for another bathroom for me, and ran far down the platform, leaving her backpack with me. Unfortunately, right then, our train pulled up, and we gathered all of our belongings and motioned for AshWat to jump on the car  closest to her. I grabbed her backpack, and stepped into the car with Felipe and AshCap. AshWat mistook our hand signals and ran to join us, hands up in amazement as the Metro doors slammed shut with her still on the outside, watching helplessly as her friends sped away. With her backpack, all of her money, and her cell phone. I won’t say we didn’t laugh, because we did. Her face had been so funny as she realized what was happening. Plus, we knew it would be okay. She’d just hop on the next train and meet us at our stop.

At the next stop, we hopped off to wait for the next train, which we were sure AshWat would be on. There were eight minutes between trains, and I still had to use the bathroom in a bad way. I decided to go for it and dashed out of the station, hoping to find a restaurant or anywhere with a restroom. No such luck. Apparently we were smack in the middle of a cultural city center, with monuments and roads circling all around the Metro station. It was eleven at night, and there were zero prospects. I ran around the outside of the building. This was happening. There was a small stone building, possibly an information booth, right there in the open, with a shiny red motorcycle parked a foot away. I pulled my pants down, squatted in between, and peed. I’m not sure how many passersby got a show, but I couldn’t worry about that. I hiked up my clothes, ran back in, purchased another ticket, and made it with four minutes to spare.

The next train pulled up, but we didn’t spot AshWat. We figured she might be in one of the end cars, so we jumped on and rode all the way to Santa Appolonia, switching back a car at each stop.No AshWat.

We waited at the end for three more trains, and when she still didn’t appear we got worried. Felipe kindly agreed to stay there in case she showed up, and AshCap and I went back to find her, hopping on a train that would take us back to the Zoological Garden stop. We couldn’t fathom why she hadn’t been on any subsequent trains, and prayed she hadn’t wandered out of the station looking for help. She had no phone, no money, and no Portuguese. How would we find her? I felt doubly terrible because she had been trying to help me when it happened. Her mom was going to kill us if we lost her daughter in a Portuguese subway station.

We rode all the way back, praying God would send her a guardian angel, and that we would find each other. No AshWat at the Zoo center, and we nervously headed back towards Santa Appolonia. She had to be there. Please, God.

As we desperately peered through the throngs of people exiting the train, our hearts jumped. There she was, with Felipe. Thank God.

Apparently, she had been sure we’d come back for her, and as she sat down to wait, she struck up a conversation with a young Indian woman named Anu. Anu decided to stay with AshWat and help her look for us. After three trains, they decided we weren’t coming back, and Anu rode two extra stops with AshWat to make sure she was reunited with us.”Are you sure they are your friends?” she asked. Just because you take someone’s stuff and leave them..jeez. She even offered to let AshWat stay at her Air BnB if they couldn’t find us. So sweet.

Finally together again, we bid Felipe a fond thank you and good night, inviting him to come to Sintra with us in the morning, and then walked up all the hills back to Georgia’s house. We were exhausted but happy, and you can bet none of us will forget such an eventful day.

Thanks for hanging in there!