Tuesday morning we packed our bags and settled in for a relaxing four-hour bus ride south to the sunny beach town of Lagos.

The Portuguese countryside may be scrubby, sparse,and unremarkable (making for boring scenery) but its coastline is jaw-droppingly gorgeous, and we couldn’t wait to see it for ourselves!

After dragging our heavy suitcases up yet another maze of cobblestone, we checked into a dungeony basement room in the Gold Coast Hostel  (Quiet After 12! Lies.). On the plus side, we got our own bathroom. A quick trip to the grocery store for packed lunch material and a couple dinners in, and then we dressed and had dinner at the Nah Nah Bar, a kitschy Jamaican-themed burger joint with disgustingly inappropriate descriptions of every menu item. The Toucan Burger  (voted one of the world’s top fifty ) was delicious but let’s just say none of us have the urge to darken that doorstep again.
We attempted a fairly early night’s sleep but the hostel crowd revved up around 1 am. Right outside our room. Lucky us, right next to the lounge area. Earplugs and Soothing Ocean Waves helped but just barely.

The next morning we helped ourselves to a free breakfast of rice pudding and hard boiled eggs and set off for the recommended Praia de Camilo. It did not disappoint. 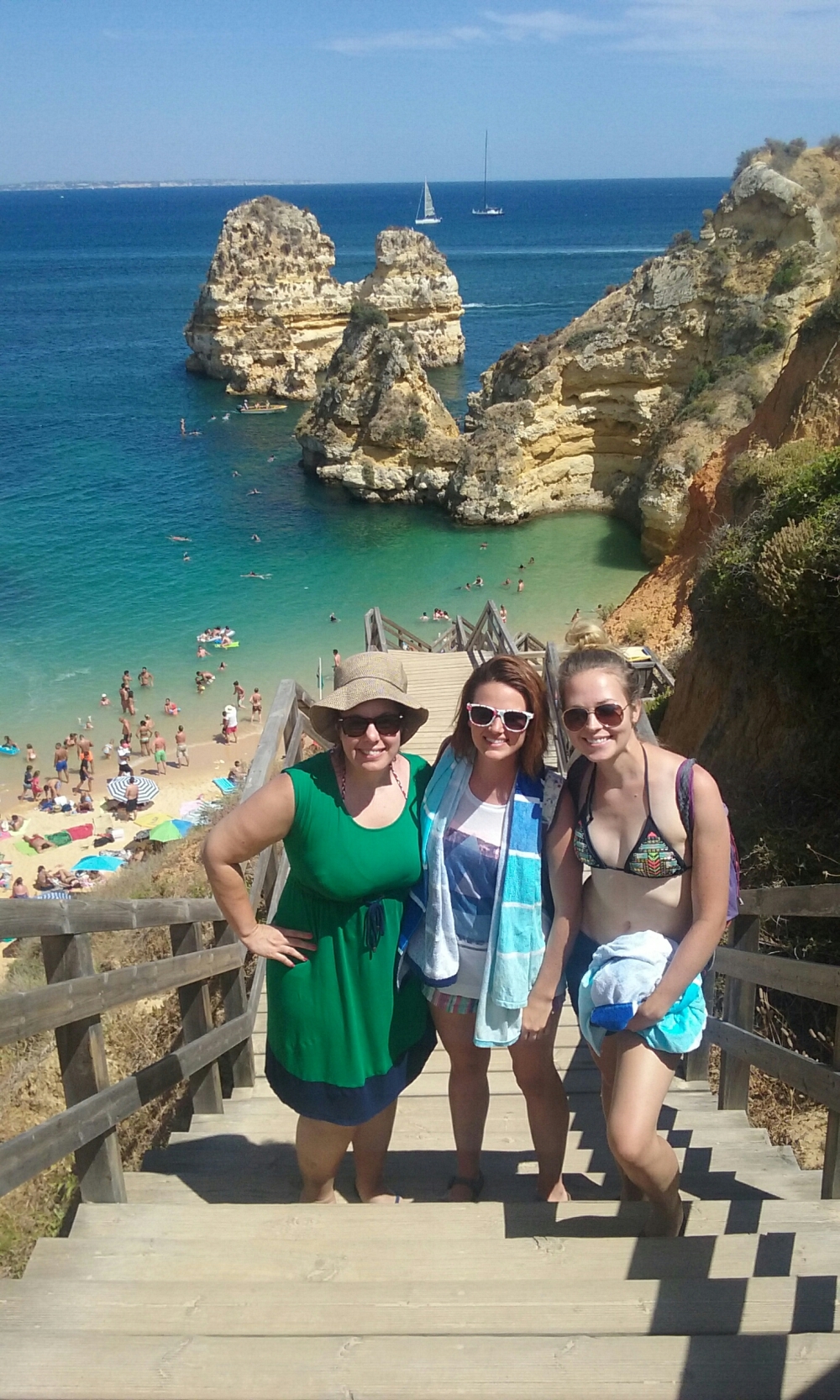 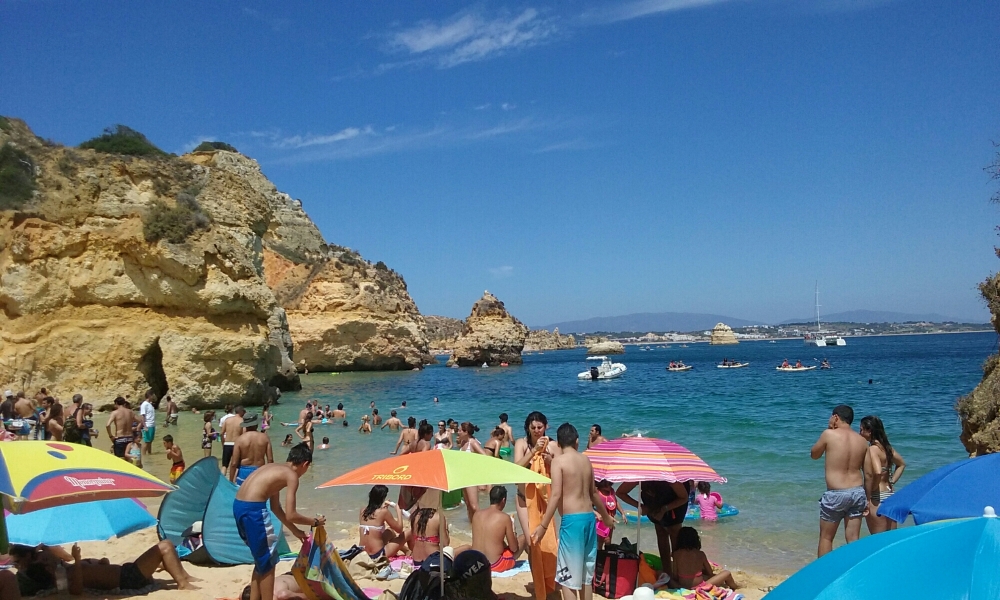 We enjoyed four hours of frolicking in the water,  flitting in between the caves and coves and just taking in the raw beauty of this crowded little beach. After, we explored nearby cliffs, discovered a totally nude beach by accident, giggled like idiots, and then walked half a mile up to the lighthouse. It was closed but we found treasure in a little surf shop: inflatable inner tubes! 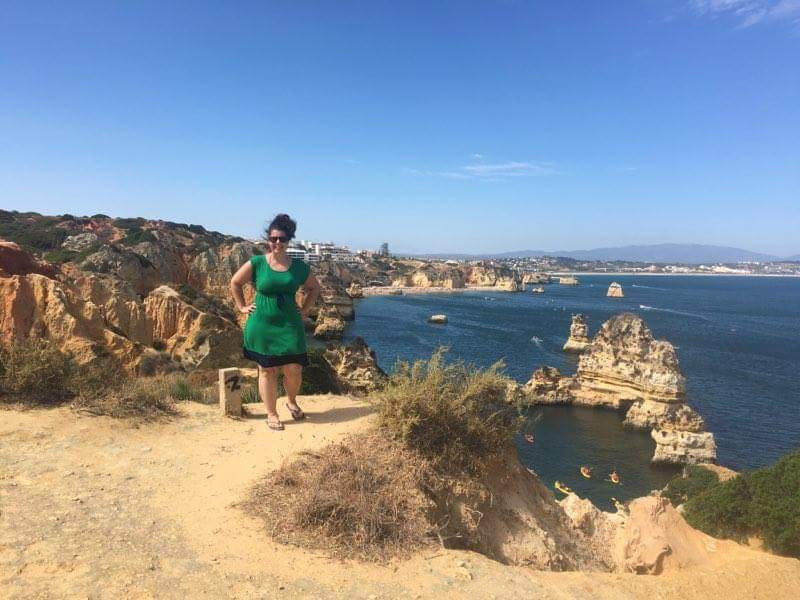 Back at the hostel, we cracked open a bottle of Portugal’s famous Port wine, made tortellini, and I had the pleasure of introducing the girls to the wonder that is Marcel the Shell.

Thursday morning we grabbed our tubes and headed towards Praia de Pinhao. As beautiful as Camilo had been, we wanted to see as many of the beaches as possible. We laid our towels out as far back as possible because we’d learned the day before that the tide comes in very swiftly and your stuff will get soaked or swept away if you’re not careful! We blew up our tubes (well, AshCap blew up mine. I was still working on the trademark sandwich I made each day in Lagos: tomato, fresh mozzarella, and pesto on a freshly baked artisan roll. Perfection.). 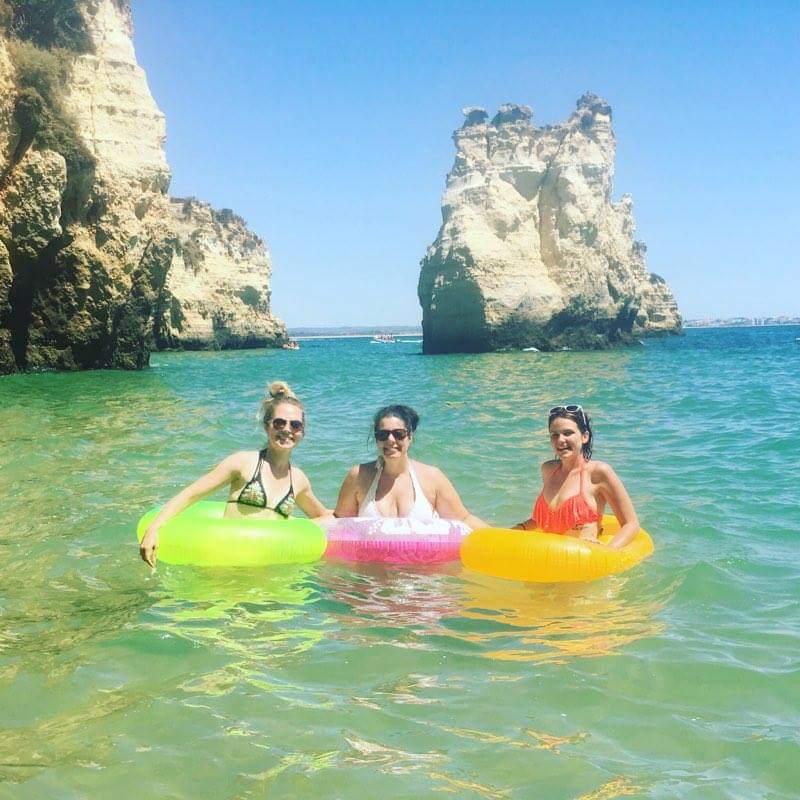 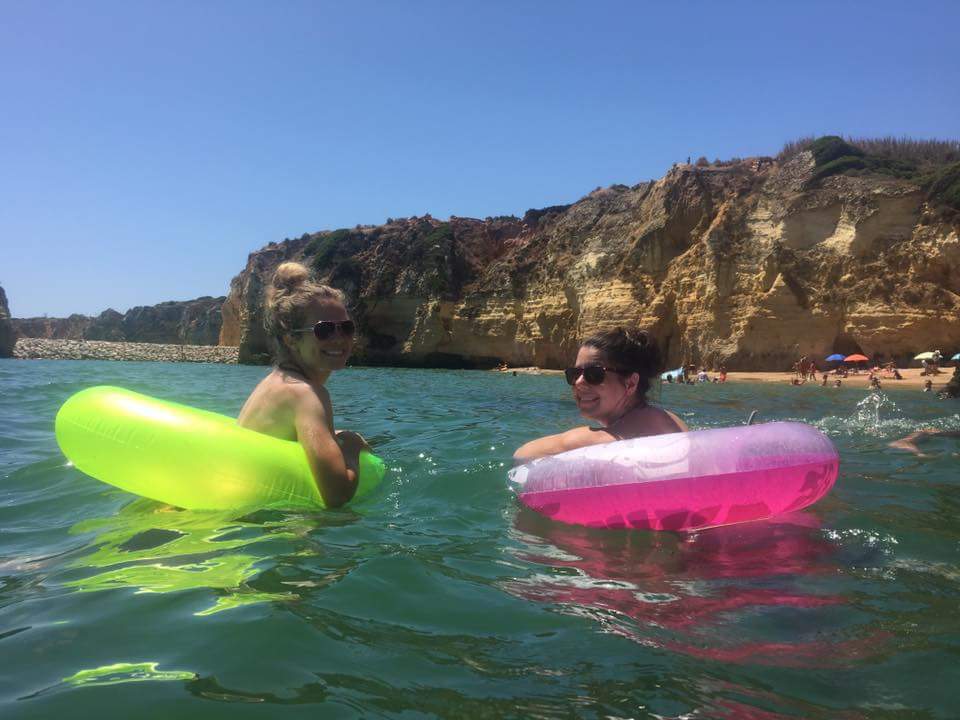 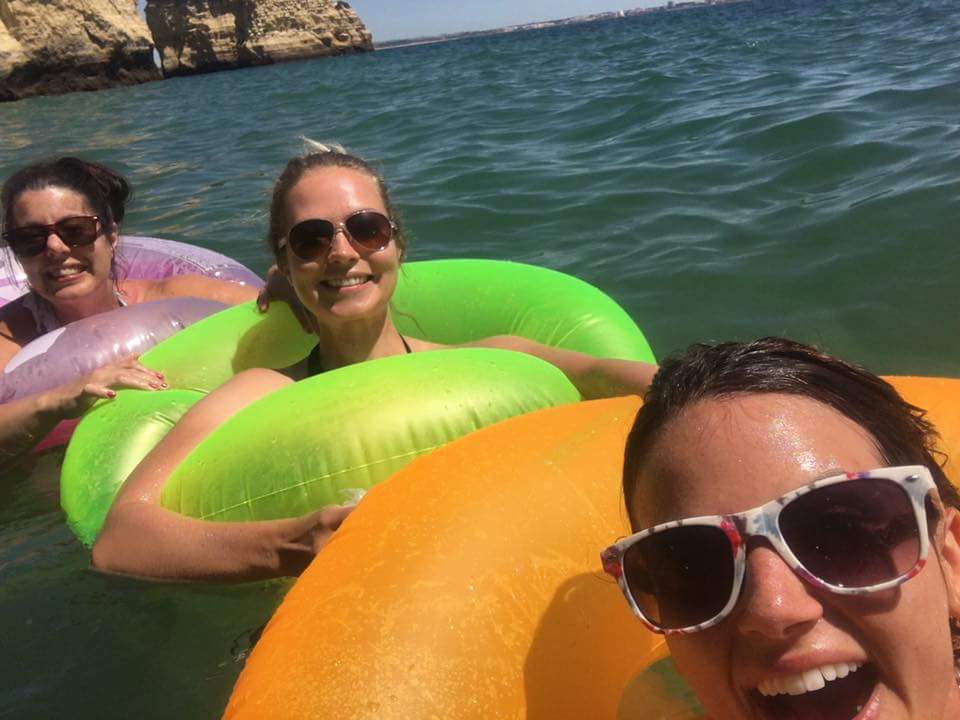 We played for hours, bobbing in the gorgeous turquoise and indigo waves, singing, and exploring new beaches as we went along. They were separated but connected through tunnels or rock arches. The coastline in Lagos is truly remarkable and different than anything I’ve seen before. Wild and breathtaking. 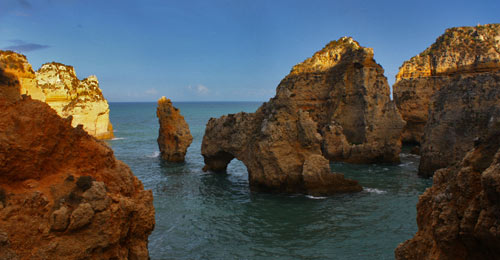 When we finally tired we headed back and decided to try a Portuguese restaurant that came highly recommended. Unfortunately the wait was between one and two hours, so we headed next door to Whyte’s Bar, a truly grimy little dive, where we enjoyed two for one Mai Tai’s. The fun part was the staff. They were from the U.K., Finland, and Australia, and it was neat to hear the stories of how they ended up working in a little corner bar in Lagos, Portugal.
Jamie, a young, boyishly handsome Brit, spent a long time alternately talking  with us and making fun of our attempts at a British accent. AshWat’s line was “I’d like a spot o’ tea” and I gave it my best shot with “Well, you’re on your high ‘orse, innit?” Absolutely terrible. I blame the two for one Mai Tai’s. 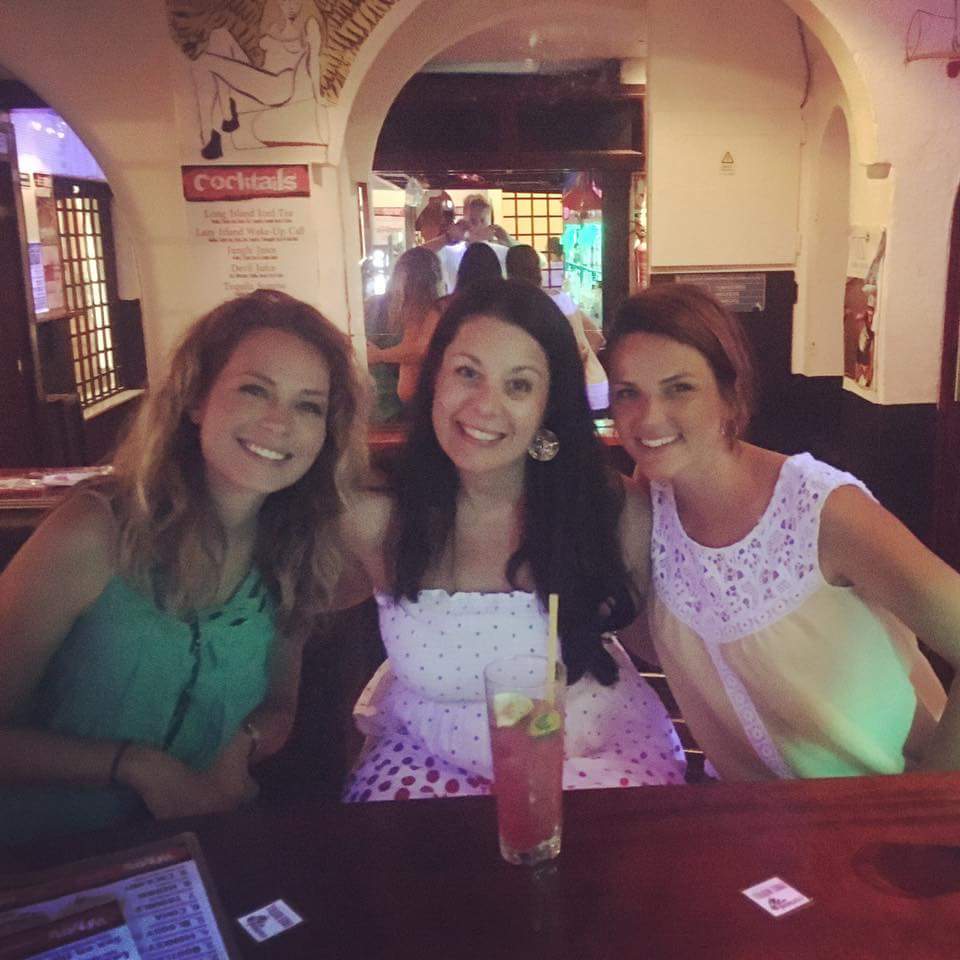 Jamie informed us that he was a drummer in a local band and would be playing at Lazy Jack’s down at the marina the following night and invited us to come.

Two hours had passed and our table next door was still not available. It was eleven p.m. and we were hangry, so we decided to try our luck somewhere else. Everything. Was. Closed. Our last attempt was a restaurant called “Ol’ Bastard’s” and when we walked in a kind-eyed man regrettably informed us that the kitchen was closed. We thanked him anyway and headed back out into the street, but he came out after us.

“Wait!” he called. “My wife is the chef. She’s American and she heard your accents and she said she’ll make you dinner!”

The kindness was almost overwhelming. We sat and quickly ordered three of the house specialities: Fish and Chips. AshCap and I did English style with mushy peas and AshWat tried Australian which was spicy and served with beetroot salad. Everything was delicious and we ate at lightning speed, not wanting to keep the staff waiting for the dumb Americans who waited too long to eat dinner. 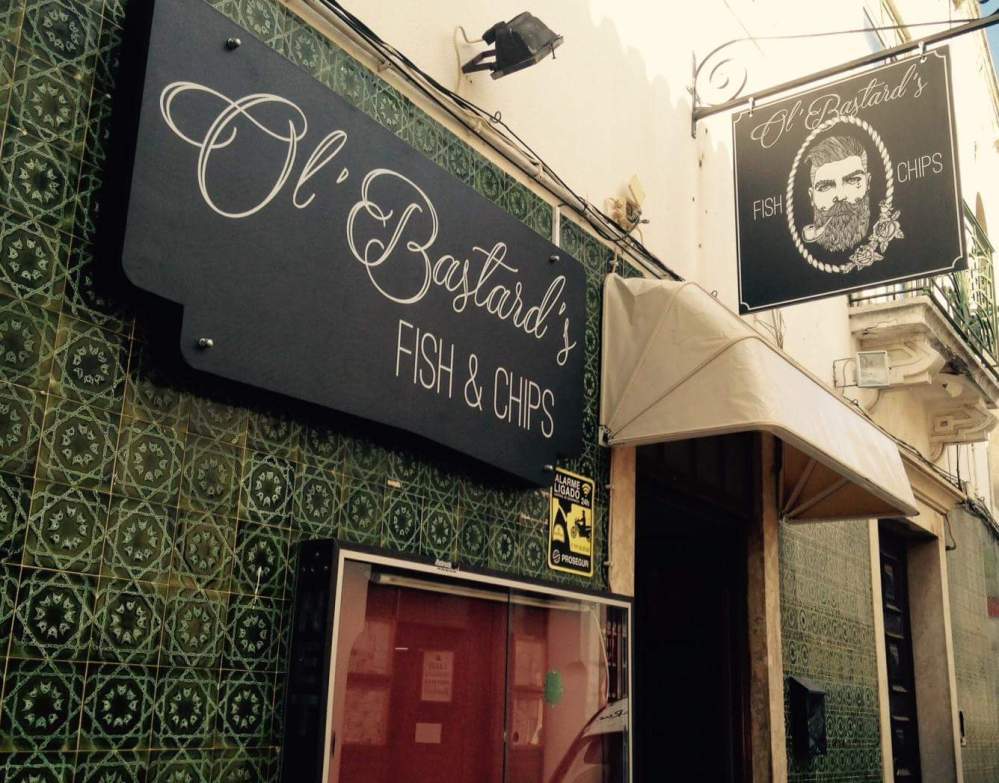 We thanked the man profusely (who, judging by the drawing on the wall was Ol’ Bastard himself) and asked him to thank his sweet wife Allie (who happened to be from Kentucky, just like AshCap!).
What a sweet ending to the night.

We were loving Lagos so far.There are good people everywhere. Even at a place called Ol’ Bastard’s. 🙂